Using scikit-learn, it’s very easy to create this lower dimensional representation.  If I have fingerprints for a set of molecules in a list called fp_list, I can simply make a call like this.

This code creates a PCA object with a predefined method and uses this object to generate a lower dimensional projection of the data.  The call to “pca.fit” then generates a set of coordinates.  In this case, we asked for two components, so crds[0] will contain the first principal component and crds[1] contains the second principal component.  We can then plot crds[0] (PC1) vs crds[1] (PC2) to get a view of the chemical space.

In this particular case, the first two principal components only explain 5% of the overall variance. Can we consider the plot above to be an accurate representation of the relationships between the similarities of the molecules represented by the principal components?  In the plot below we show the first two principal components for one of the datasets from the DUD-E database.  This database originally developed to validate docking programs, consists of a number of molecules from the scientific literature that have been shown to be active against a particular biological target.  Accompanying the active molecules is a set of decoy molecules.  These decoy molecules are not active against the target of interest but have been selected to have similar properties (molecular weight and LogP) to the target molecule. A docking program should then be able to differentiate the active molecules.  Recently, a number of groups have also been using the DUD-E database to evaluate the performance of machine learning models.  Again, the objective is to identify the active molecules that have been distributed with the decoys.  In the plot below, we use PCA to create a visualization of a set of molecules from the mk01 dataset in from the DUD-E database.

I’m surprised at how often I see papers where people put up a plot like the one above without considering the fraction of the variance explained by the first two principal components. Given the fact that the figure above only represents 5% of the overall variance, perhaps we should try an alternate approach.

According to the scikit-learn documentation, t-sne can be slow with very high dimensional data.  The docs recommend using another method such as PCA to reduce the input data to 50 or fewer dimensions.  Again, we can do this easily with scikit-learn.  In order to identify the appropriate number of principal components, let's take a look at how the explained variance changes with the number of principal components.  We can do this with a simple function.

Based on the analysis above, it looks like 50 principal components should provide us with a reasonably good representation of our chemical space.  We can generate the t-sne representation with a couple lines of code.

If we plot this, we can see that a subset of the active compounds are very different from the decoys, while others appear to be within the distribution encompassed by the decoys.

Let’s take a look at what happens if we use this data to build a predictive model.  I built a Random Forest model with this data, then colored the plot above to indicate which molecules were predicted as true positive (TP), false positive (FP), true negative (TN), and false negative (FN).  As might be expected, the active molecules that sit outside the distribution of the decoys were predicted correctly, while those that sit inside the decoy distribution were incorrectly predicted as false negatives. 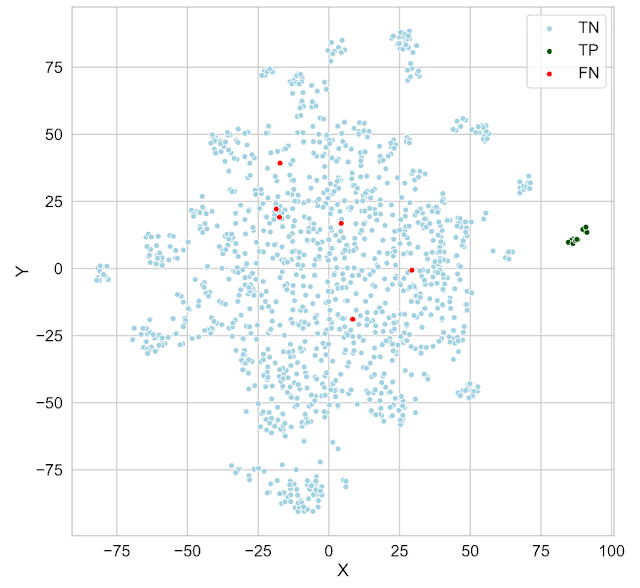 For me, there are a few take-homes from this exercise.

As usual, the code for this exercise is available on GitHub.  In this case, there are two Jupyter notebooks.   The first, 2_visualizing_chemical_space.ipynb describes how to set up the PCA and t-sne visualizations.  The second 3_running_a_predictive model.ipynb shows how to build a predictive model and use the coordinates generated using t-sne to visualize the performance of the model.  In order to make it easier to run the notebooks that I’ve created, I’ve started to put everything into a single Git repo.  I’ve also created a Binder environment for this repo so that people can run the notebooks without installing any software.