Use Cases
Let's say that a vendor has a set of 2 million compounds available for purchase, but we only have the budget to purchase 50,000.  How would we choose the 50,000?  The first thing we would probably want to do is to filter the 2 million to remove compounds that contain undesirable functionality or fall outside a desired property range.  I wrote an earlier blog post on filtering chemical libraries so I won't spend any time on that here.   Let's imagine that we did the filtering and we still have 1.75 million compounds remaining.  How do we find a somewhat representative subset of 50,000?  There are a number of ways to do this.  During the heyday of Combinatorial Chemistry in the 1990s, far too many papers were published on methods for selecting subsets from larger compound libraries.

We can run into similar situations when we have biological assays with relatively low throughput.  Most pharmaceutical companies have compound libraries with hundreds of thousands or even millions of compounds.   Unfortunately, many biological assays are labor intensive or can't be miniaturized to enable large numbers of compounds to be screened.  Let's say that our corporate collection has 100,000 compounds, but our assay can only handle 10,000.  We could use k-means clustering to select 10% of our screening database as a primary screen.  Once we get the results of this primary screen, we could then use similarity searches in the larger database of 100,000 to select compounds for follow-up screens.

Virtual screening provides another interesting use case for k-means clustering.  Let's say that we docked a million compounds into the active site of a target of interest.  Of these million compounds, 10,000 have reasonable docking scores, but we only have the budget to screen 500 compounds.  We could simply choose the 500 compounds with the highest docking scores, but this may not be the best strategy.  Published results and lots of experience has shown that the relationship between docking scores and biological activity is somewhat weak.  Another strategy might be to cluster the 10K compounds into 500 clusters and select the compound from each cluster with the highest docking score.

Once we've done the clustering in any of the cases described above, we still need to choose one or more molecules from each cluster.  In the virtual screening example, the choice is somewhat obvious, we can simply select the molecule from each cluster with the highest docking score.  What about selecting compounds for screening?  How would we choose which molecule from each cluster to screen?   There are a number of ways to approach this and the strategy we choose will be influenced by the ultimate goal of the experiment being performed.


There is no right or wrong way to cluster a set of molecules or to select representatives from clusters.  Ultimately, choices should be influenced by the goals of the experiments being performed.  In the implementation described below, I added a field to the output file called "Center" which is set to "Yes" for the molecule closest to the cluster center.

A variant on this idea is a technique called "mini-batch k-means" where subsets are used in each iteration through steps 2-4 above.   The code I wrote uses the mini-batch k-means implementation in the SciKit Learn package.

An Open Source K-means Implementation
As mentioned above, I wrote a Python implementation of k-means clustering for molecules that is available on GitHub.  The GitHub site has the details on installation and usage so I won't go into that here.   In addition to the Python script that does the clustering, I added two Jupyter notebooks that provide examples of how the clustering results can be used.  The first notebook shows a situation similar to the virtual screening use case described above.  We start with a set of 10,000 molecules and cluster into 100 clusters.  We then plot a histogram to look at the cluster populations and use a nice trick in Pandas to select the molecule from each cluster with the lowest LogP.

The second Jupyter notebook shows a couple of ways that we can visualize the clustering results.  In this case, we begin with a set of 1,000 molecules consisting of 10 sets of 100, each of which is reported to bind to a particular biological target.  We cluster this dataset, which was taken from a paper by Cortés-Ciriano and Bender, then use the Jupyter notebook to visualize the clustering results as a heatmap.  One cool aspect of this notebook, which was motivated by an earlier blog post from Greg Landrum, is the ability to interactively visualize the chemical structures of the compounds for each target and their cluster assignments. 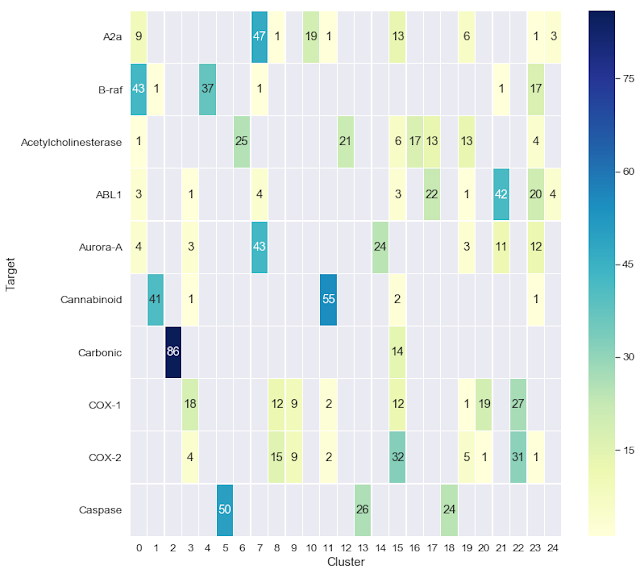 This k-means clustering implementation is capable of handling relatively large datasets.  I was able to cluster 1 million molecules into 10,000 clusters in 1.3 hours on my MacBook Pro.  The memory requirements are relatively small, so larger sets should be doable.  Hopefully, some of you will find the code useful. Please add a comment or GitHub issue if you have difficulties or improvements to the code.